We here at Digilent believe strongly in the power of practical application of knowledge, particularly in regards to engineering education. We champion the value of “learning by doing,” and we think projects are an integral part of any electronics journey. And with the National Week of Making upon us, we more than ever are excited to get our hands dirty with some awesome projects.

However, as you can maybe imagine, having a lot of people doing projects all the time yields, well, a lot of results. Insanely cool things come out of our talented team’s brain’s, but for every Giant Snake or Claw Game, there are….a few….not quite so brilliant ideas. But hey, mini failures breed many successes, and we are unafraid to admit that even we have been known to make mistakes.

So today we bare to you the Almosts, the Yikes’, the “Who let you loose in the Makerspace again” projects. Those brave new concepts intended to break new ground, and often ended up just breaking on the ground. Sparks of genius that later turned out to just be actual fire sparks, likely due to improper wiring. These are their stories.

Description: Intended to engage people at Trade-shows, this demo idea would be a giant dunk tank housing one brave Digilent volunteer. However, instead of having to throw a ball and hit a target to dunk them, people would have to build a simple circuit in under sixty seconds. This would ideally help get people interested in electronics with the lucrative promise of getting to see another human drenched with water.

How We Were Planning on Doing It: The original design would have had a Basys 3 housed behind the dunk tank, attached to a servo which could activate the trigger, dunking the volunteer. The dunk tank itself would be built using a similar design as the body of the Claw Game, except bigger and watertight. The person attempting to dunk our volunteer would have to make an LED blink using the electronic components found in the Analog Parts Kit, and a PmodALS would be in place to determine if the circuit was successful. The PmodALS would be attached to the Basys 3, and upon completion of the task would send a signal to the FPGA to trigger the servo.

Reasons for Rejection:  Too big, too messy, not enough volunteers, and apparently water and electronics do not mix well.

Description:The idea would be that we would place a small rodent inside a robot that could be controlled from the inside, hereby granting him autonomy and freedom.

How We Were Planning on Doing It: The system would include a clear Hamsterball placed atop a Zybot, with a PmodJSTK inside that controls the wheels. This would allow the rat to learn to control his vehicle and maneuver around the offices as he pleases. Also, there would be a small Nerf gun attachment that could fire Nerf darts up at people when a PmodBTN inside the cockpit was pressed. 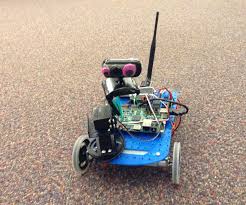 Reasons for Rejection:  It turns out that a rodent trapped in a small space, then placed in an unfamiliar environment, has priorities other than learning to drive its little adorable rat car. On a related note, I could not figure out how to install a small rat toilet, and besides the problem of it not seeming to want to participate as I intended it to, this also violates our office’s no pet policy.

Description: This project would improve upon our automated candy dispenser with a projectile launcher that motivates interns to work harder with sugary incentives.

How We Were Doing It: LabVIEW would be connected to the candy contraption to monitor intern productivity using preset measurement indicators relevant to each position (i.e. how many projects were in progress at a specified time checkpoint). When productivity was not effectively met, candy would be launched for 30 uninterrupted seconds by the WiFi controlled WF32. Two quickly moving DC motors would spin attached robot wheels to launch candy similar to a baseball pitching machine.

Reasons for Rejection: We discovered that too much sugar can actually decrease work potential as interns droop sleepily in chairs following sugar crashes. Without proper precautionary measures with the type of candy dispensed, possible reason for rejection also arises from issues with allergic reactions.

Description: Automate your vanity with the Reality Star Bot, a personal assistant that follows and records your every move while live streaming important moments to a specified YouTube channel.

How We Were Doing It: The Nexys Video would be fastened to a robot body that enables it to follow you around throughout your daily activities. A programmable perimeter could be set to prevent harm to the machine as you lived your daily life, and quick reflexes allow the robot to move around you without video interruption. The addition of the PmodMAXSONAR and PmodALS would help your bot measure this personal perimeter and stay out of trouble by avoiding stationary objects, such as desks or walls, while making sure your overall lighting is superb.

Reasons for Rejection: In theory, the Reality Star Bot would significantly improve your ability to broadcast your personal brand. But a lack of video editing controls present just as many opportunities for harming as they do improving one’s brand. Also FPGAs can be tricky to work with if you are not super experienced, but that part we could have worked around by lurking the Learn site. The major problem was the brand representation, because the demographic of people who might be interested in having their every move documented online may overlap with the demographic of people who do not enjoy being intentionally or unintentionally mocked on the internet.

Hopefully these ideas can serve to inspire you, and we would love to hear your personal rejected ideas in the comments below! Additionally now until the end of June, Digilent is offering free shipping on all orders over $200, so it is the perfect time to explore your project ideas!